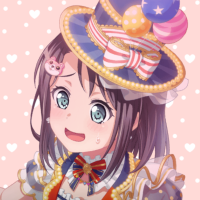 I'm your local tired person who still doesn't understand why we need to learn algebra.

I got into Bandori early September of 2018 when my friend showed me the game. That was when my downwards spiral into the world of crying over fictional characters more than I already did began.

My favourite band will always be Hello, Happy World! They're just;; yes.

♡ Somebody Save me from this game ♡

Fluffy Character Championship Misaki and/or Hagumi, 2.5k+ stars : Not out yet

Issen Summer Dive Eve, Arisa, or Hagumi, 2.5k stars : Not out yet

Kimi Ga Inakucha Kokoro and Misaki, 30k+ stars : Not out yet