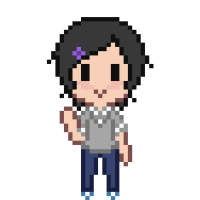 
Heyo! I'm Shiny, though some people might know me as Lyn, Lyni, or Kyu. I'm a pixel artist and spriter, probably more well known 'round these parts as the one who made the pixel chibis on Sukutomo/SIT. Along with helping out on the site here (mostly as a dataminer), I'm also Mod Rin on the bangdreaming tumblr blog and one of the mods for the /r/BanGDream subreddit!

I'm currently in college majoring in Computer Science and Linguistics. My other main fandoms outside of Bandori are KagePro, D.Gray-Man, Danganronpa, SIF, and Pokemon.

My favorite band is PasuPare! Though I also love HaroHapi and Popipa a lot~ Misaki's my best girl, though Aya, Himari, and Ako are close seconds!

My favorite girls, in order by band, are: