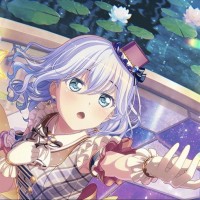 
Minna, Konnichiwa! I'm Mitsuki Amasawa and my bandori username is "Kokoronavirus" (it changes frequently so don't be alarmed if it's not the same as that). I love everything about Bandori!

I've been playing since the Girls Anthology Event, so about May 2019. Thanks Eureka-chan for recruiting me! So, not very long but long enough. I'm not amazing at bandori, but I'm not trash. So somewhere in the middle. I have full comboed all songs on Expert and hard up to level 24. I’m currently working on 25s/26s.

Best girls: (I love them all equally but some just stand out!!!!)

Best Boys: -This will be updated as soon as AASIDE comes out, at this point I really can't say...

I am the lead guitarist of CEMPAZUCHITL, a BanG Dream inspired band that I started with my friends. We do covers of Popipa, Roselia, and more, along with original songs. I play on a .strandberg* Boden 6 in black (just like LOCK!). In addition, I actively play the viola in a symphony and clarinet in my school band. I learned guitar simply to be in a band like Bandori's. YouTube channel coming eventually with covers! I love playing music with my friends, and I dream of playing in Japan among my idols!