Their music leans more towards old school soft rock and jazz, sometimes with a bit of a cutesy bubblegum sound so it’s on the quiet side, suited for small intimate settings. Other influences include enka and musical theatre. Occasionally though, they’ll go all out and cover a metal song for the hell of it and to appease their drummer.

(Two of them started out as LL! OCs shh. Also sorry about the cartoony saxophone but I can't art orz) 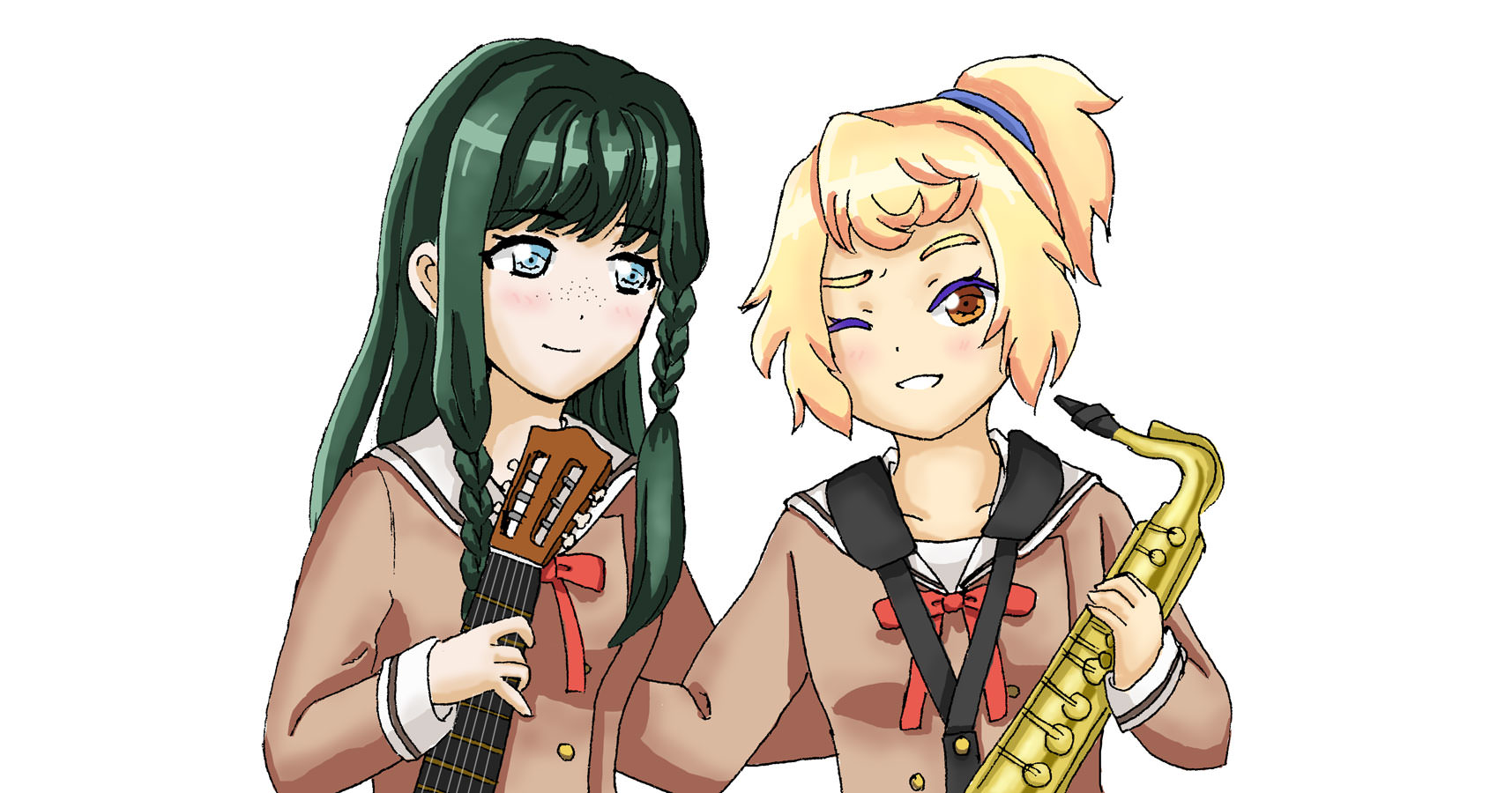 A quiet, aloof vintage fashion enthusiast. Doesn't have a lot to say but when she does speak it’s with wisdom and sensitivity. She has trouble being herself around others and so can appear stiff, blank-faced and slow to react in social situations, but that’s just the fear inhibiting her self-expression. Never knows what to do with her hands and consequently fidgets a lot. It’s hard to get through her barrier but once you succeed she’s the most fiercely loyal and caring friend you can find. Thanks to Miho, she found the confidence to perform and the stage is the one place where she can freely express herself, though she overcompensates for her usual shyness to the point of looking dramatically constipated when she sings.

The founder and leader of the band. Grew up surrounded by music so she’s dabbled in a bunch of instruments for fun, though she’s definitely most adept at the sax. Thought it’d be cool to be a drummer too but due to having spastic diplegia she can’t really operate the pedals effectively—not that it stops her from grabbing Marin’s sticks at every opportunity (on that note she can walk but not for long distances and uses various mobility aids when necessary). She’s lively, affectionate and thoughtful and generally super comfortable to be around. Tries to be relentlessly positive most of the time but also wears her heart on her sleeve, so when she’s pissed she’s pissed and when something gets to her she bawls her eyes out for an hour before bouncing right back. Loves coloured eyeliner and weird socks.

Miho and Tomomi met in their first year of middle school when Tomomi stayed back to practise in the music room. She was too nervous to sing in public usually but it was pretty late so she thought no one would be around to hear her. Instead Miho wheeled in on her singing ‘For Good’ from Wicked and because they’re both musical theatre nerds a duet happened and now they’re super close. 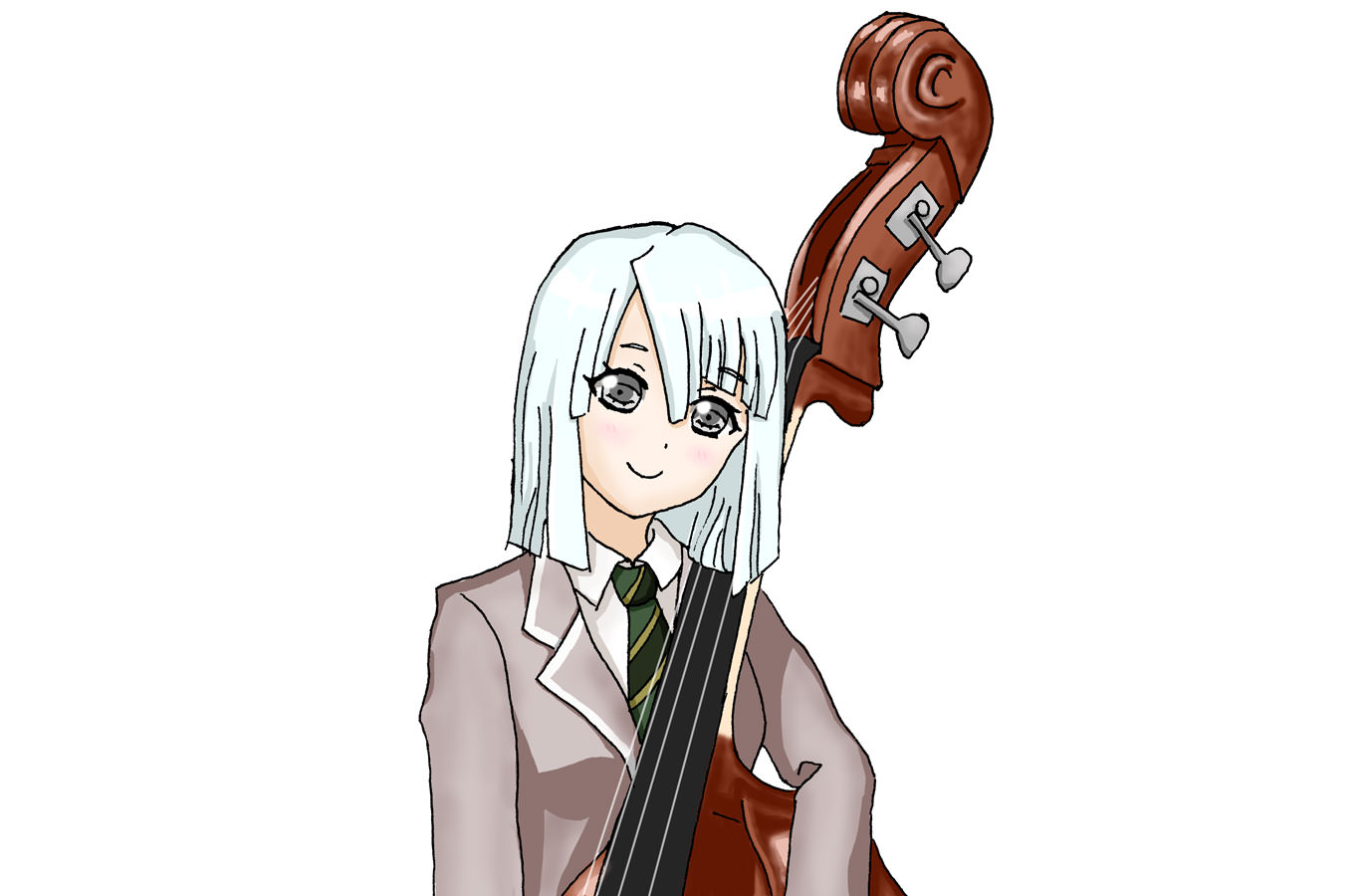 A whimsical dreamer, always wrapped up in her imagination. She lived in another city for most of her life so prior to joining the band she didn’t really have any local friends. Being taller than her bandmates, she tends to stand out and her doll-like appearance makes Asane foam at the mouth with envy. She’s amiable and sweet-natured but tends to keep to herself, and is a massive hoarder, cluttering her room with everything from childhood toys to empty chocolate boxes. Her bass is her everything—her classmates have known her to ask it for help with maths problems, and she’d probably sleep with it if she could. Really she’s just lonely and misunderstood and dreams up her little utopias for company.

Kuuki joined the band after running into Miho at the music store, and was responsible for recruiting Marin and Asane. Despite her eccentricity she’s pretty perceptive when she chooses to notice things and she saw something in their wacky dynamic that would spice up the band. 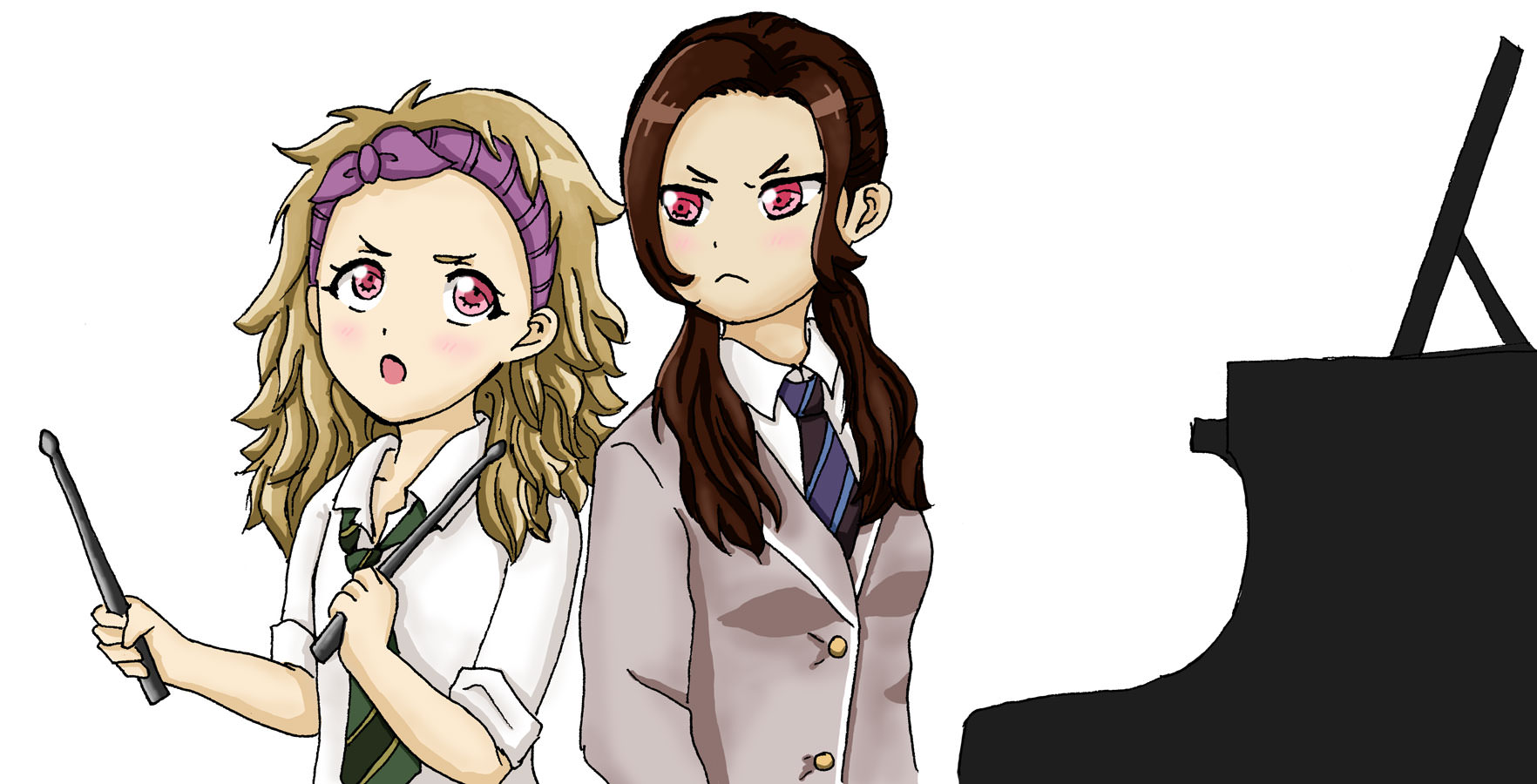 A smol IT geek and likely the laziest person you’ll ever meet. If not for her sister’s nagging she’d probably never leave the house or take a shower. That said, she will go to extreme lengths to prank her sister (once she moved her entire drum kit into Asane’s room to disrupt her piano practice and thereafter Asane made sure to lock her door whenever she went out), program useless apps and wake up half the neighbourhood banging on her drums at 2 am. Most days you’ll find her sprawled on the couch playing video games and no one can fathom how she never gains weight. She wasn’t too interested in Velvet Vista’s music at first but eventually grew to appreciate its introspectiveness and controlled nuances.

A classically trained musician and straight-A student with endless truckloads of ambition and drive. She’s a consummate professional with her brisk, no-nonsense attitude and is always busy with student council work, playing at various school functions, weddings etc. and volunteering. Failure barely puts a dent in her confidence—she just dusts herself off with spite and keeps aiming for the top. Only Marin can reduce her to a yelling three-year-old with a few words. Asane also religiously keeps up with fashion trends, wanting to be seen as sophisticated and mature, but because she has an incurable baby face and a bit of chub everyone just pinches her cheeks and calls her cute, to her never-ending chagrin.

These two never stop fighting. It gets pretty physical, with hair-pulling and biting and rolling on the floor and whatnot. The others have to keep breakable instruments away from them when they get like that. They live in a pretty big house (not ridiculously huge like Kokoro’s mansion, just normal big) and their parents are at work most of the time so it’s a wonder it hasn’t burnt down.