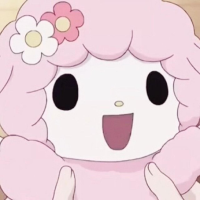 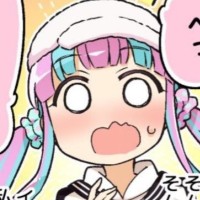 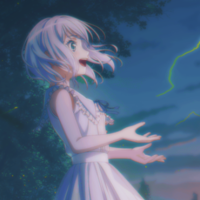 I am very lucky 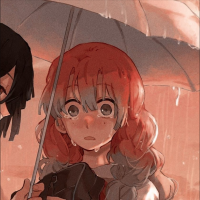 It's a little draw of Hagumi, I really love this card

The KasuYuki CeVIO AI designs incorporating the other band member colours … gave me messed up ideas so. I wrote something

Harsh sunlight sets off the iridescence in ROSE’s pale hair as she turns in response, the shimmering colours a stark contrast to the monochrome blanketing the rocky hills around them. “Why do you insist on calling me that? I thought we’d established that you were likely here before I was.”

The stars in POPY’s brown hair faintly click against each other with her bounding movements. “But but! You’re so cool and mature! I wish I could sing just like you!”

“There’s no need for that. Your style is your own.”

Senpai. A word that has no rhyme or reason here. A whisper from a world, a system that no longer exists, that neither of them understands.

POPY runs her fingers thoughtfully down her pink tie, tracing the stripes along some path of vague familiarity that leads nowhere. It used to mean something, she’s sure. But thinking about it makes her feel like she might crash, like reaching too high for the stars and forgetting that what goes up has to come down. Stars. They used to mean something too. They’re so lovely and twinkly, but she feels all sharp inside when she looks at them. Touching one would be like getting pricked by needles, she thought, but ROSE said she’d never get close enough without burning into dust.

So they sing. There isn’t anything else to do here. Too much silence doesn’t bode well for vessels that exist to carry sound.

Something isn’t right. ROSE is singing like she always does, but the words don’t make sense. The words never make sense, so why does that bother her now? Why is her system saying unidentified threat, keep it out, shut it down—

This song is different. ROSE puts her hand to her throat as the barren landscape flickers, just like the jerking in her limbs, in her face, in her copper veins—and then she puts her hands out in front of her and they’re glitching, coloured squares and lines flashing with a rapid, uncontrollable pulse.

This song isn’t hers. Isn’t only hers, and none of the others were either, but she hears voices she shouldn’t know—laughing, angry and shouting, kind and encouraging—and a sound … a sound made of many sounds layered perfectly on top of each other, that she’s sure she’s never heard before. Sounds from fingers touching instruments outside of one’s body, with strings and keys and wood.

Together … they’d made the song together …

POPY’s hands are on her, the heavy layers of ROSE’s dress fanning out across the cracked earth, her long hair a shining river trailing through it. The colours flash like light reflections splintered on a liquid surface, brighter and clearer than they ever have—violet, teal, red, pink, white—and she scrambles to push every strand out of sight, burying her face in her veil until the light of the sun is gone.

POPY doesn’t turn away. Even with tears streaming down her cheeks, she faces the horizon and sings like a star fizzling out, and ROSE stands there watching her, awestruck and afraid. Afraid she’ll disappear like the others did. Like they both might, in a second or a day or a year. POPY’s youthful voice rings across the wasteland, across what may as well be the entire universe.

Things will be alright, I know

’Cause you’ll never be alone

Don’t give up, you’re nearly there

Just a little more to bear

And with us where you belong

You can sing an honest song

She stumbles and cries out at the strong shock that sends her doubling over, her frame seizing and rippling and shaking. “Please, ROSE-senpai … I wanna see where it goes …”

The stars locked around POPY’s wrists and ankles are sharp, points jabbing into her flesh, but she knows for certain now that stars are not like that at all. At least not her stars. Holding on to the slightly shorter girl beside her, she reaches for them.

All together, their voices answer.

The tall brunette nestled among a dozen rabbits, her smile faraway and a little crooked. A giant chocolate parfait defeated in less than five minutes, and the unlikely victor giggling sheepishly beside the empty glass. Callused drummer’s fingers fixing the obi around POPY’s waist before the summer festival with so much tenderness, except she wasn’t POPY back then. And the star stickers that started it all, and the lonely girl they led to, armed with lethal garden shears she’d only ever use with care.

They won’t answer anymore, but POPY’s voice gains a strength that isn’t her own yet can only come from within her, and she finishes the song with her wet face turned skyward.

That this world brims with hope

And that I am not alone

And that I am not alone

“This isn’t the end, ROSE-senpai,” she says, turning with a smile that cracks the wires in ROSE’s chest. She touches the stars in her hair. Red, blue, pink, yellow, purple. “As long as we have music, it won’t be.”

very quick combination of the rui/rinko cards from the new set!! 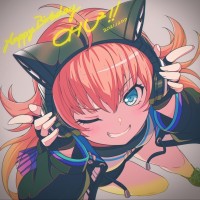 only reason I chose railgun arisa model cause I think it was the only model that had confused emote??Idk

February 1st was my birthday It's a draw for CurePopuri, sorry for the late I have a problem with my phone.